Construction continues to move at a fast pace! The bones of each structure is in place, and now much of the work is shifting to interior work. The project remains on track for completion in mid-2020.

The construction site has been buzzing with activity throughout the summer, and now citizens can get a tangible grasp on what this new community space will look like in the very near future! The foundation is now in place, and much of the storm water infrastructure has been installed.

Construction on the Creedmoor Community Center has begun. Contractors have begun demolition of the building interior and portions of the exterior. Construction is scheduled to be completed in the summer of 2020.

The City of Creedmoor Commissioners, City Manager, CPRC Chairman and Contractors grabbed their shovels and dug in the dirt making for a successful groundbreaking ceremony.  The project's contractor is expected to be on site next week, May 20, to begin the highly anticipated restructuring of the Creedmoor Community Center.

The Board of Commissioners will consider a vote approving the Harrod & Associates contract at their April 8 meeting, after which construction will begin. The public is invited to attend a groundbreaking ceremony Friday, April 12, at 1 p.m., at the Battle Roberts ballfield on East Wilton Avenue.

A public bid opening took place February 21 at City Hall, at which Harrod & Associates provided the lowest responsive/responsible bid. The Board of Commissioners voted to move ahead with the project at their February 23 budget workshop.

The project was officially released for bids on January 11.  A mandatory pre-bid meeting was held for contractors January 29.

Work on construction documents continues with a tentative date to advertise the project for formal bids set for January 9, 2019.

The Parks & Recreation Trust Fund (PARTF) Board met on Friday, August 24 to award funding for projects in the 2018/2019 funding cycle.  The City of Creedmoor team received accolades for their application and were awarded the maximum allowable amount of $500,000 for the Creedmoor Community Center project.

The project scope and construction design documents will be reviewed at the Board of Commissioner's Meeting on Tuesday, September 4 at 6:00 pm in the Board Room at Creedmoor City Hall.  The meeting is open to the public.

The community center project is nearing the final phases of design and structural engineering.  MHAworks will present an update on the project to the Board of Commissioners at a specially-called meeting scheduled for Monday, August 6 at 5:30 p.m. in the Board Room at Creedmoor City Hall.  Members of the public are encouraged to attend.

Creedmoor staff submitted the project PARTF grant application on April 24, 2018.  PARTF provides dollar-for-dollar matching grants to local governments for public parks and recreation projects.  The awards announcement for 2018 recipients is expected to be made in late summer/early fall.

In March, the Creedmoor Board of Commissioners voted unanimously to approve the conceptual design for renovation of the existing Senior Center and gymnasium facility as well as the construction of the new gymnasium.  With this design approval, the architectural firm will now progress to development of construction documents which will be utilized for the construction bidding phase of the project. 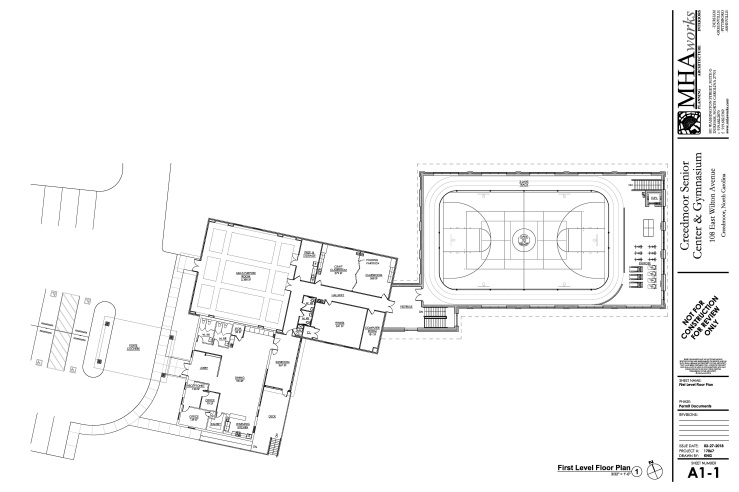 The City held two public involvement meetings in support of its PARTF grant application on February 8 & February 14.  Both meetings were well attended and included in-depth discussion of this project.  MHAworks will incorporate final design elements and present to the Creedmoor Parks & Recreation Committee (CPRC) at a public meeting on February 27, 2018.  The CPRC members will review all work to date, suggest any further adjustments, and provide a final project recommendation for consideration by the Board of Commissioners at the March 6, 2018 Work Session.

(Pictured below is Bill McCaffrey of MHAworks presenting at the February 8, 2018 public involvement meeting).

MHAworks of Durham was awarded the architectural design contract for the new gymnasium and senior center renovation project.  Shortly thereafter, MHAworks architects and engineering partners met with city staff for a project kick-off meeting.  To help finance this project, city staff will be submitting an application for a $500,000 grant from the NC Parks and Recreation Trust Fund (PARTF).  PARTF provides dollar-for-dollar matching grants to local governments for public parks and recreation projects.  To gain community support for this PARTF project, a public meeting was held on Thursday, February 8 from 6:00 to 8:00 pm at the Creedmoor Gymnasium and Activity Center.