City facilities including City Hall, Community Development Offices, and playground/picnic facilities at Lake Rogers Park and Harris Park are closed to the public until further notice.  Visitor access to the Creedmoor Police Dept will be restricted via intercom confirmation of necessity.  Non-essential city personnel will be available through teleworking arrangements during business hours to assist residents by phone or email.   Please call the main line (919) 528-3332, Option 0 or email customerservice@cityofcreedmoor.org.  Read the Declarations.

December 2019
The boardwalk and hiking trails are complete and open to the public! A ribbon cutting was held on November 14, and Public Works continues to enhance and maintain the primitive hiking trails. Be sure to visit Lake Rogers and enjoy this beautiful addition to our community! 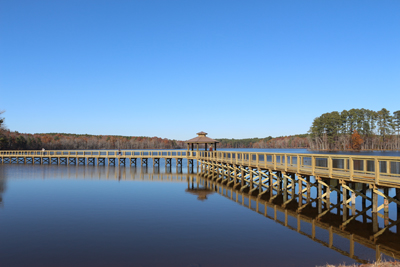 October 2019
Construction of the boardwalk is well underway, and nearing completion! The boardwalk will soon connect visitors to the west side of Lake Rogers, and allow access to a wooded hiking trail. The trail has been cleared by contractors, and awaits final improvements to allow safe access. A ribbon cutting is tentatively scheduled for mid-November! 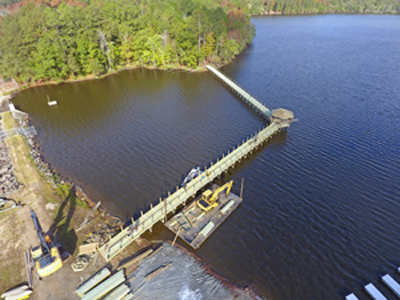 September 2019
Contractors have begun boardwalk construction by installing the support pylons that will connect the boardwalk from the existing park over to the west side of the lake. Clearing of the new walking trails on the Lake Rogers west side will begin soon. 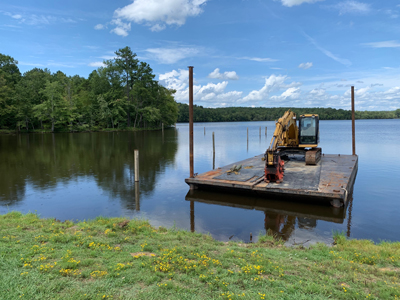 June 2019
Phase I
The finishing touch of Phase I was construction of a new sign marking the entrance of Lake Rogers Park. The transformation of Lake Rogers is well underway.

With Phase I of Lake Rogers Park nearing completion, a ribbon cutting ceremony was held Wednesday, May 1 revealing the new picnic shelter and dock.  Phase II of the Lake Rogers Park improvements project, which include a boardwalk, patron walking trails and a fishing platform is set to begin following the final touches of the new shelter area. 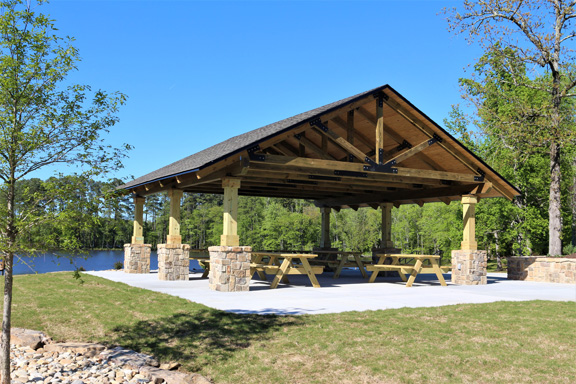 After almost nonstop rain for weeks hampered progress, work has really picked up during recent sunshine-filled days. Concrete has been poured and trusses installed for the new shelter, existing buildings have been re-shingled, and decorative landscaping stone is being placed around the new shelter area. It's all coming together in time for Lake Rogers Park concessions to open next month. 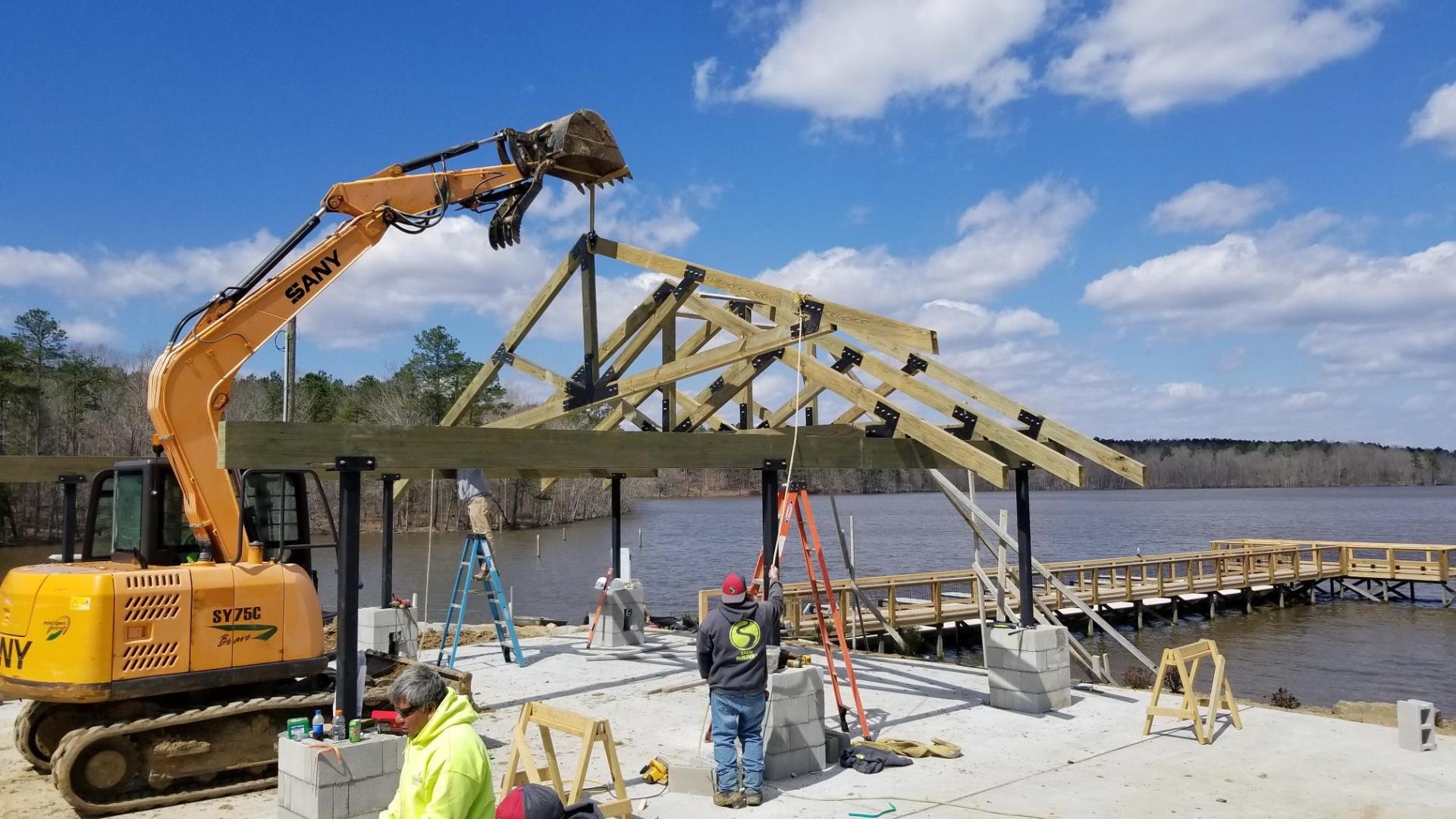 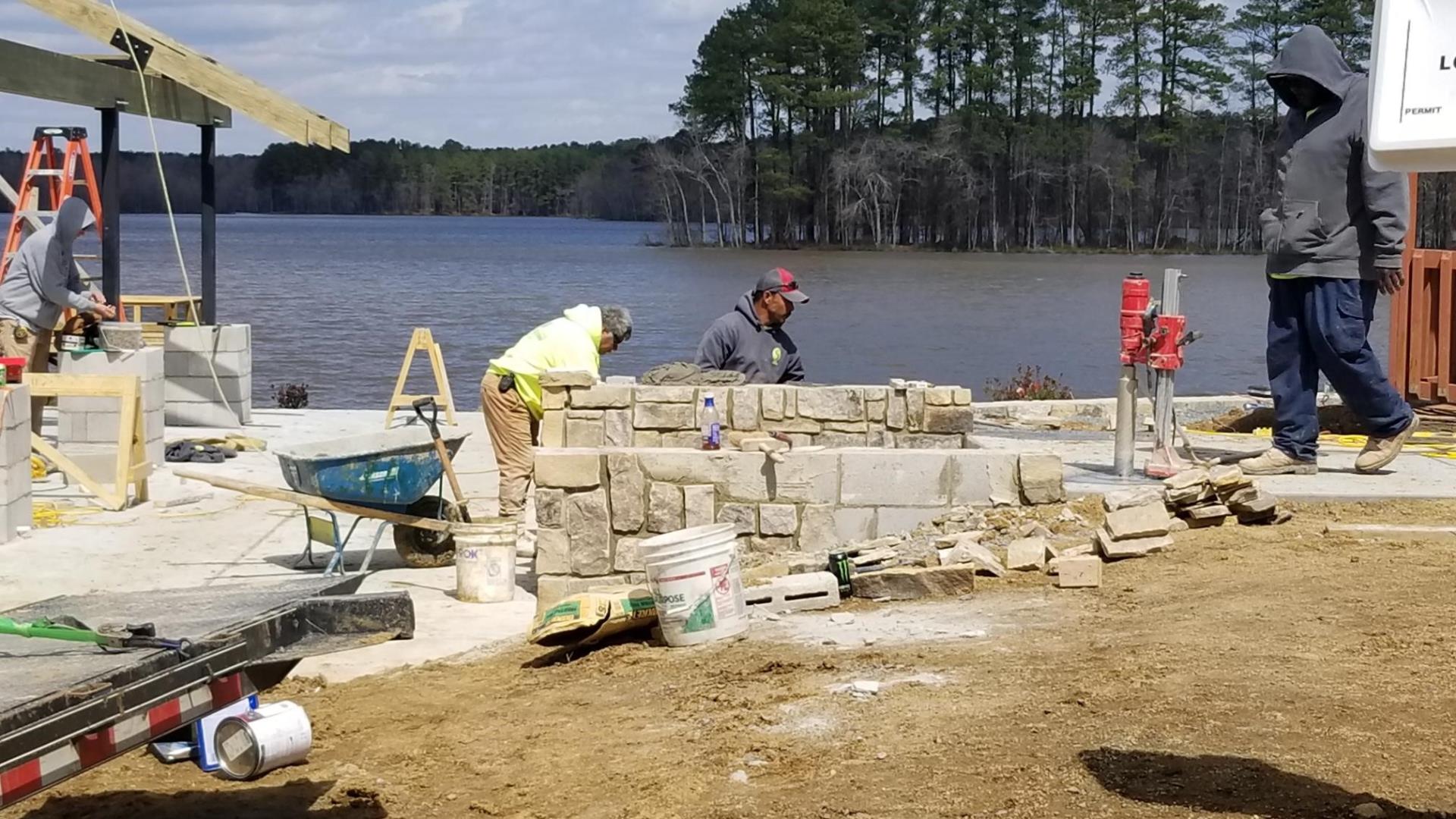 Work on Phase I continues as the construction crew poured footers for the new shelter on January 11.  While not officially part of the park improvement project, the existing dock also received a complete rehab over the last few months, with new decking/handrails and additional structural supports added. 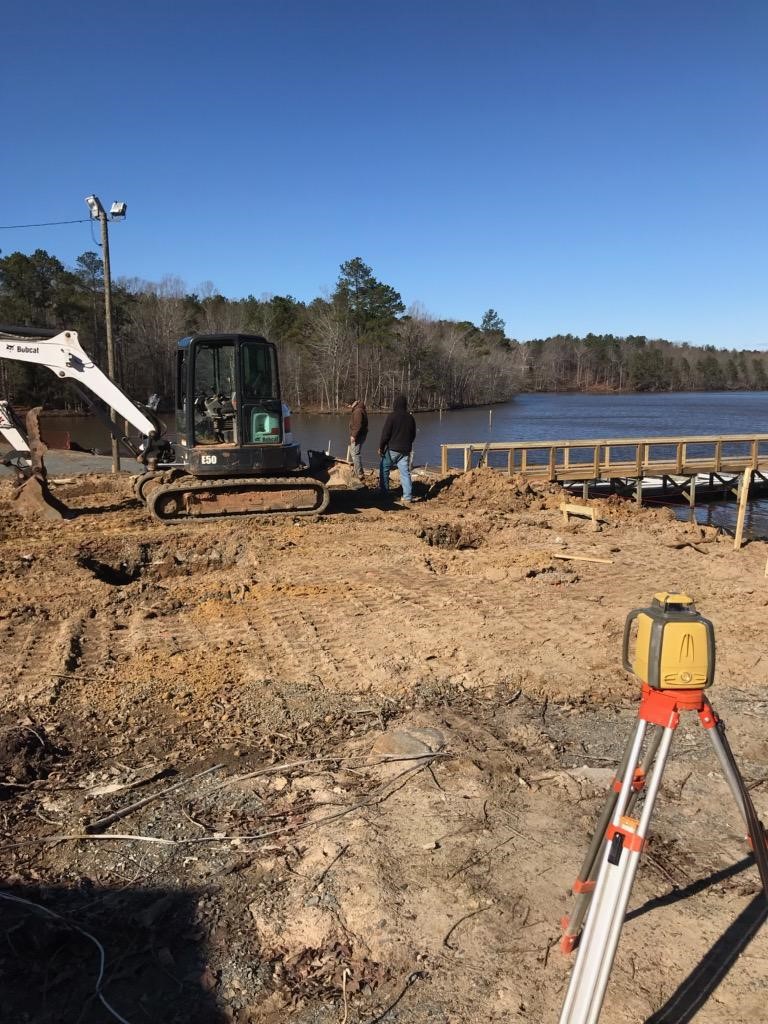 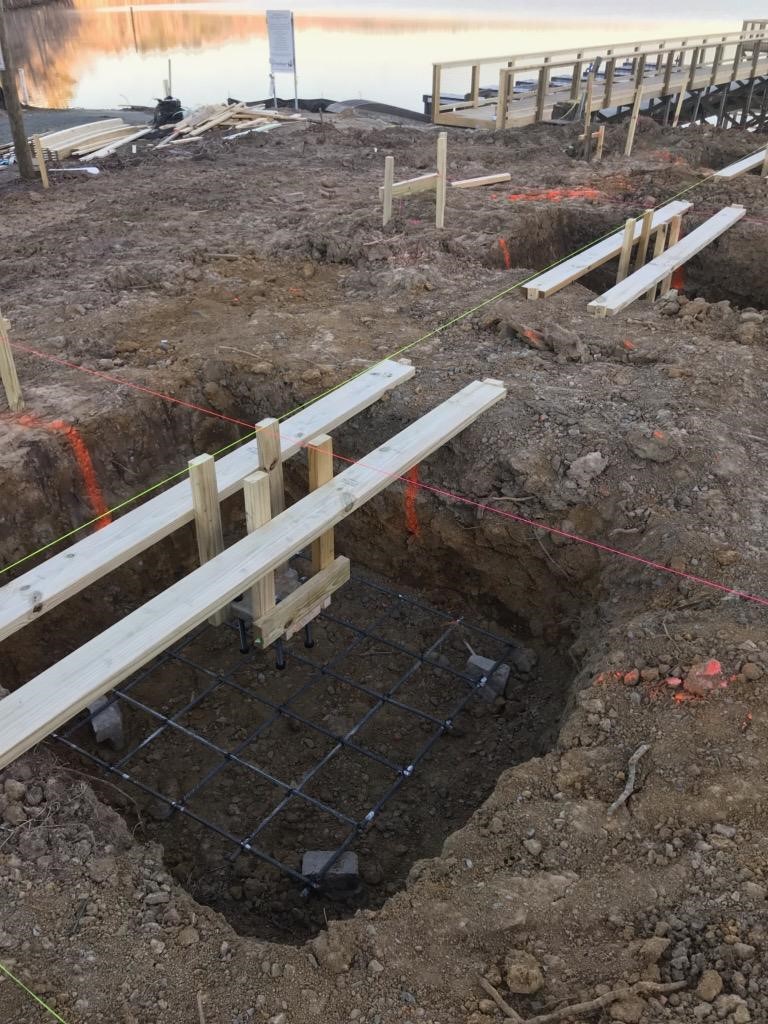 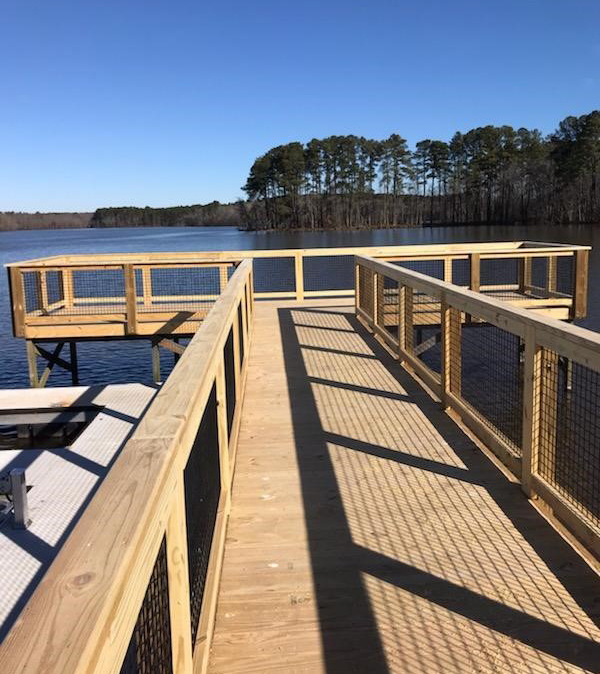 Engineers have completed the construction documents for the floating dock, fishing platform, and walking trails.  Proposals will be accepted as part of an informal bidding process.  Contractors interested in submitting a bid may contact Summit Design & Engineering at (919) 436.3786 EXT 3239.  Submission deadline is January 29.

The city awarded a contract for the first phase of the project to include construction of a new main shelter and improvements to landscaping and pedestrian access.  Demolition on the existing structure took place on October 25 with site clean-up work continuing through the end of the month.  During construction, park access will be restricted to the east driveway entrance and construction fencing will be erected around the work site to maintain site safety.  Park users are asked to stay clear of the construction area and respect all signs and other barricades intended to provide for their safety. 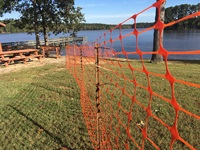 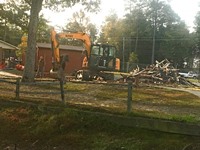 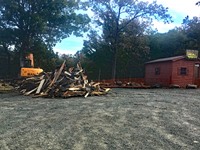 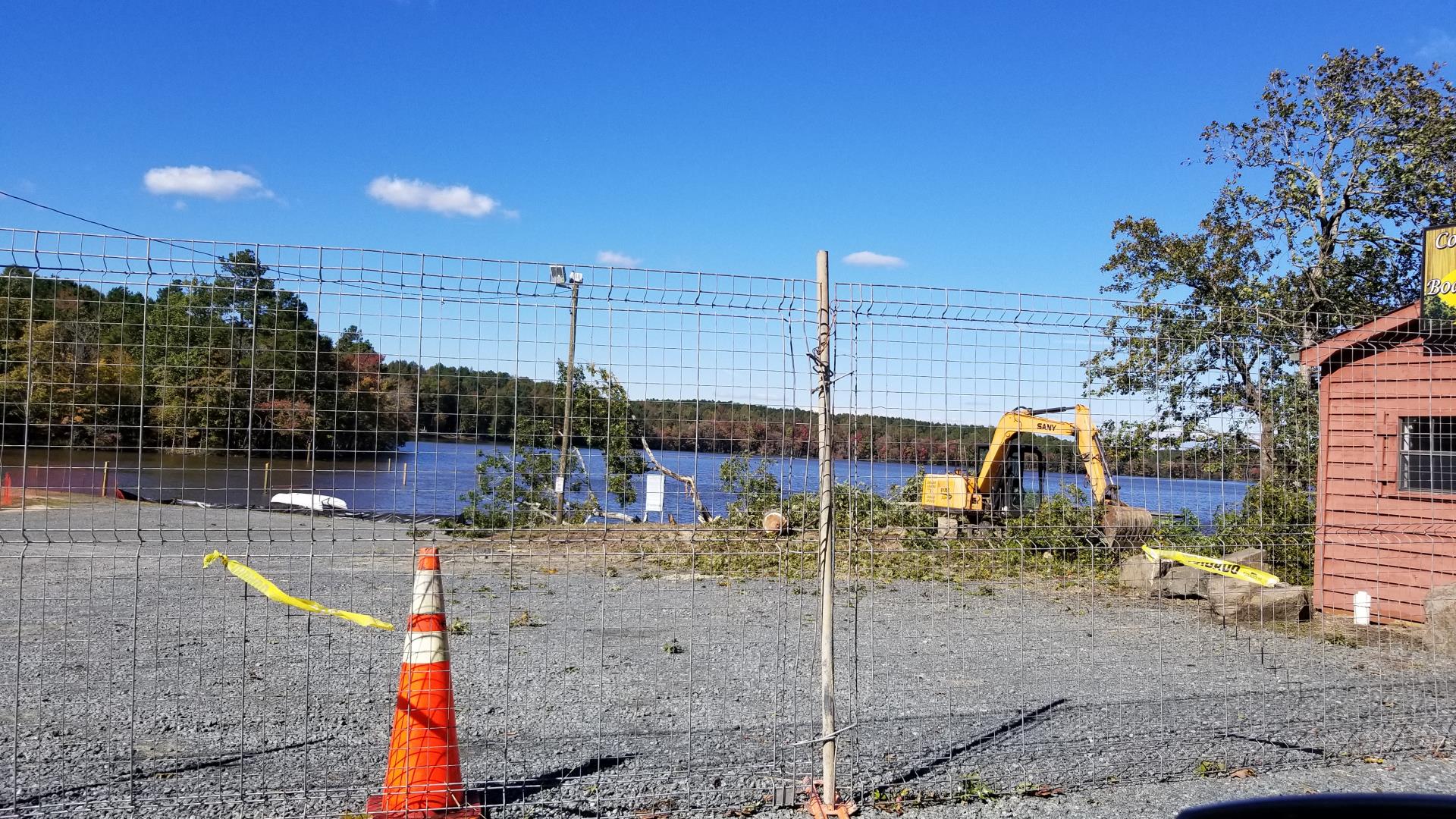 Revised construction documents including the board-approved reduction in scope of work were released for bid on July 21.  Note: Work to be completed in this initial phase of the master plan is depicted in the images below; elements from the master plan not included at this stage of the project can easily be added in subsequent phases, if desired. 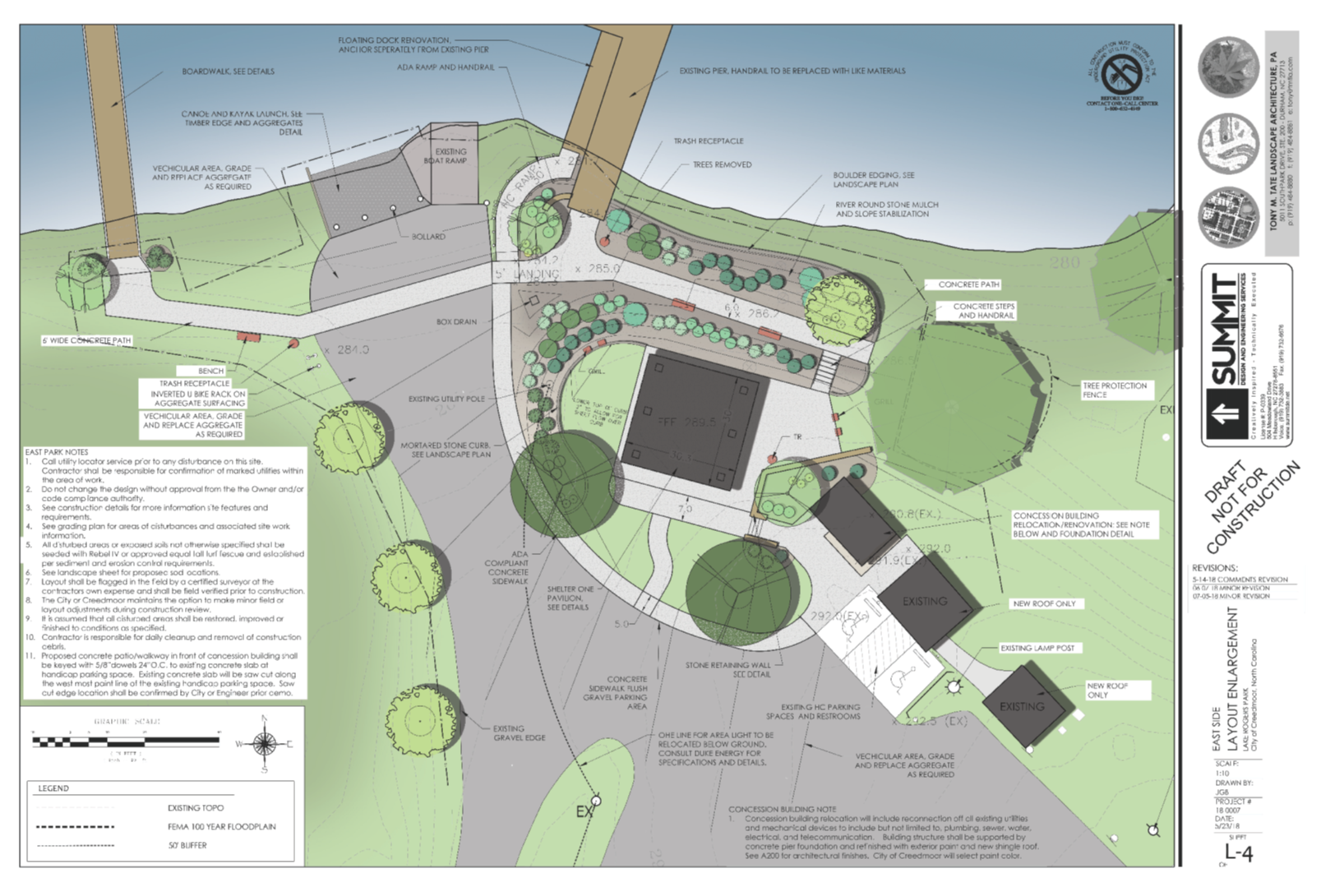 Details of the renovations to shelter one pavilion area. 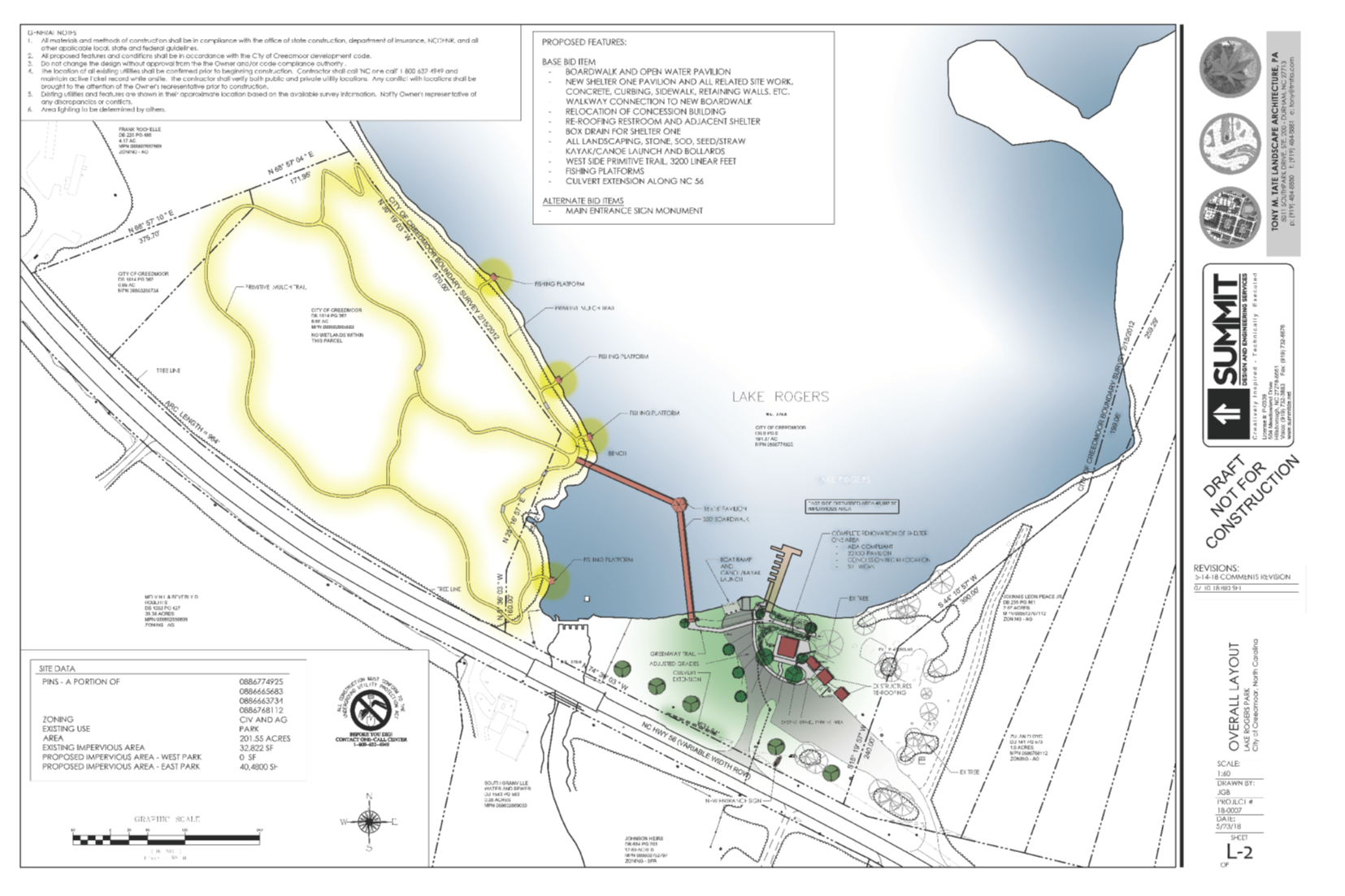 An overview of the work to be completed with the 2018/19 project.

The public bid opening held on June 26 did not produce the statutorily required number of bids for the formal bid process.

A special meeting of the Board of Commissioners is scheduled for Tuesday, July 10 at 5:00 p.m. in the Boardroom at City Hall, 111 Masonic Street.  The Board will discuss changes to the scope of work regarding the Lake Rogers Park improvement project.

Construction documents have been finalized and released for bid through June 26.  A public bid opening will occur on June 26, 2018 at 2:00 p.m. in the City Hall Board Room.  The city encourages all interested bidders to view the announcement here.

The final design and project approval for the entire master plan for Lake Rogers Park took place on March 6 at the Board of Commissioners Work Session.  Summit Design & Engineering will now proceed with developing bid documents; once those documents are finalized, the project will be advertised for construction bids.  The timeline for release of bid documents is expected to be in May. 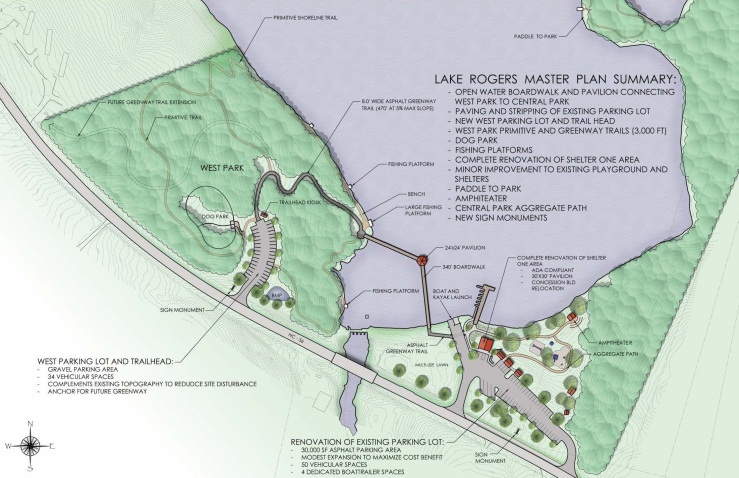 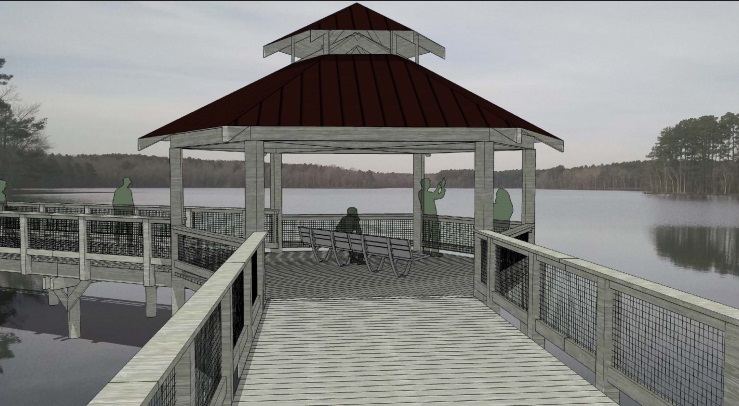 Final design work on the Lake Rogers Improvement Project was presented to the Creedmoor Parks & Recreation Committee (CPRC) during their bi-monthly public meeting on Tuesday, February 27.  City staff and Summit Design & Engineering representatives have been working to incorporate optimal facility enhancements while staying within budget constraints; therefore, design for some amenities will be shown for future phase consideration (for example, a small ampitheater & seating area, an aggregate path through the main park area, and 'paddle to park' area).

At the February 27 CPRC meeting, committee members were presented with final design options by Summit staff and voted on a formal project design recommendation for consideration by the Creedmoor Board of Commissioners. Summit Design & Engineering was awarded the contract for the architectural design phase of the Lake Rogers Improvements Project.  Summit architects and city staff recently met at the park on a cold January morning for a project kick-off meeting.  The tentative project schedule calls for a schematic design to be completed in February, followed by final design work, a final master plan, advertising for construction bids, and award of contract for construction during the spring.  Construction is anticipated to begin in early summer.

As part of this project, the City recently received $40,000 from the Granville County Tourism Development Authority (TDA) for use in visitor enhancements to the park.  Pictured to the right are Summit Design & Engineering Staff, City Manager Mike Bonfield, and Assistant City Manager Korena Weichel.

The 2016 demolition of the old water treatment plant near the dam at Lake Rogers Park has created the space and opportunity for additional recreation activities and increased parking capacity for the park.

At their meeting on September 19, 2017, the Board of Commissioners voted unanimously to approve the project ordinances for improvements to Lake Rogers Park.  These improvements include adding walking trails and a parking lot on the 7.5 acres west of the dam and installing a boardwalk and fishing pier connecting it to the east side.  The slope of the area where the water treatment plant stood forms a natural amphitheater.

The existing parking area is proposed to be enlarged, paved and striped, and the existing boat slips and accessibility will be improved.  Connecting the space west of the dam to the existing park triples the usable land area.